Skip to main content
It looks like you're using Internet Explorer 11 or older. This website works best with modern browsers such as the latest versions of Chrome, Firefox, Safari, and Edge. If you continue with this browser, you may see unexpected results.

This guide serves as a brief overview of UW Libraries resources, American Heritage Center archival collections, and other resources related to the internment of Japanese Americans during World War II at Heart Mountain Relocation Center in northwest Wyomin 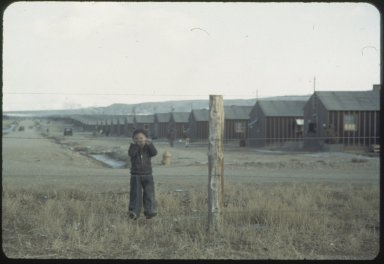 This research guide includes a listing of materials found in the American Heritage Center archival collections, UW Libraries resources, Chisum Special Collections, and resources outside the University of Wyoming pertaining to the Heart Mountain Relocation Center.

The Heart Mountain Relocation Center, named after nearby Heart Mountain Butte, was one of ten incarnation camps used to incarcerate Japanese Americans excluded from the West Coast during World War II under the provisions of Executive Order 9066 signed by President Franklin D. Roosevelt. The Center was located between the towns of Cody and Powell in northwest Wyoming. The land was managed by the U.S. Bureau of Reclamation, which before the war had initiated a major irrigation project in the area and had already constructed canals, buildings, and some infrastructure. The site was adjacent to a railroad spur and depot where internees could be off-loaded and processed.

The Center opened on August 11, 1942 when incarceree began arriving by train from the California assembly centers in Pomona and Santa Anita and an Oregon assembly center in Portland. By January 1, 1943, the camp reached its maximum population of 10,767 incarceree. This made the Center the third largest community in Wyoming at the time. The Center closed on November 10, 1945, when the last of the incarceree were allowed to leave.

Internees in relocation centers were still subject to the draft, and this generated backlash in the form of a resistance movement. The Heart Mountain Fair Play Committee was particularly active in this resistance, encouraging incarceree and other young Japanese-American men to avoid military induction. Seven members of the committee were convicted for conspiracy against the Selective Service Act, and 85 incarceree were imprisoned for draft law violations. Despite the opposition, 799 young Japanese American men, volunteers and draftees, from the Center served in the American military.

Although many resources are listed in this guide, more can be found by searching UW Libraries Online Catalog or Historical Databases. Information on how to search for American Heritage Center collections can be found on the AHC's Main LibGuide. 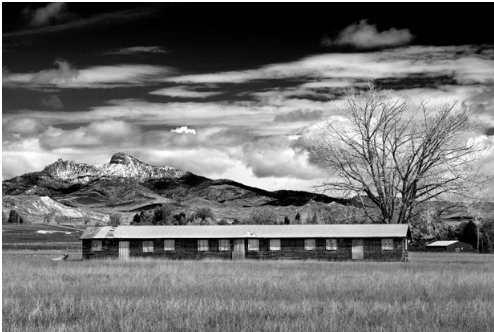 The University of Wyoming Art Museum is hosting the Moving Walls: Heart Mountain Barracks in the Big Horn Basin exhibition from August 20th, 2020 - January 16, 2021. This exhibition features photographs by night sky photographer and photojournalist Stan Honda that explore barracks from the Japanese incarceration camp in Wyoming, both before and after the closure of the center in 1945. After the closure, some of the barracks were purchased by homesteaders and many are still inhabited today, some as unrecognizable homes, shop spaces, and barns. Moving Walls brings together two tales of struggle and resilience: the confinement of a people based simply on race, and the settling of the American West by modern pioneers who chose to build new lives on the frontier. Honda’s work is paired with a film and book project by filmmaker and writer Sharon Yamato, Moving Walls: The Barracks of America’s Concentration Camps.

2020 marks the 75th anniversary since the closure of the United States Japanese incarceration camps. The Art Museum in partnership with UW American Studies Program will host a virtual symposium featuring a Thursday night Speaker Series in October, along with creative activations in partnership with Tsuru for Solidarity, a Family Saturday Workshop, and Lunchtime Conversation with Curators.