Following the American Civil War, the shipping industry suffered a major depression. The wooden hulls built in New England had a large carrying capacity, but they did not possess the speed or the durability of England’s iron and steel ships. The iron industry was relatively undeveloped in America before the Civil War, and iron shipbuilding was absurdly expensive. While shipping towns like Bath, Maine waited anxiously for a revival, many American shipyards were forced to close. [1]

The resurgence of shipping came after 1870 in the form of the coastwise trade of lumber and coal as American sailing vessels could carry cargo at a lower cost than iron-hulled steamers. Schooners were constructed in the U.S. throughout the remainder of the 19th century and into the 20th, their size and capacity increasing with each decade. Modern appliances powered by steam allowed ropes, sails, and anchors to be handled with ease by a smaller crew of 12 or 13 men. [2] Two years after the five-masted schooner Governor Brooks was launched, a gargantuan six-masted Wyoming was christened with a prohibition-friendly bouquet of flowers instead of champagne. The schooner departed for the first time into the Kennebec River on December 15, 1909. [3] 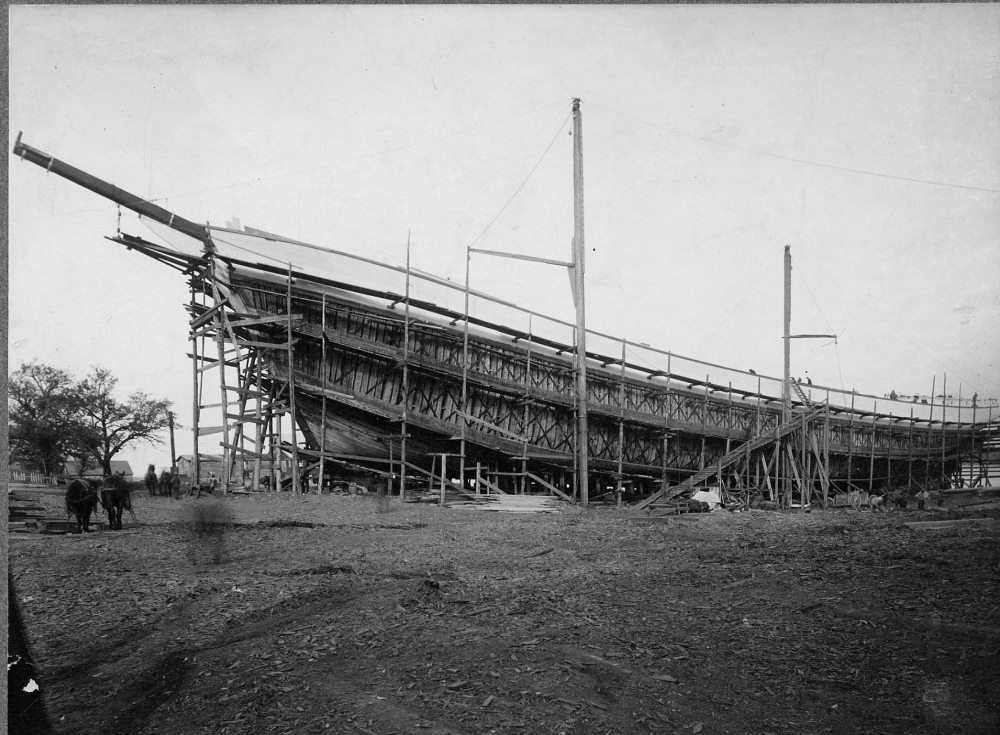 The Wyoming under construction
Image Courtesy of Maine Maritime Museum.

The sturdy and innovative Wyoming was made up of 1,500,000 feet of Southern pine and Chesapeake Bay white oak, and it measured about 330 feet from bow to stern, or roughly the distance between goal posts on a football field. Wyoming could carry 6,000 tons of cargo in addition to her own 3,731-ton girth and 8,500-pound anchors, although its narrow and exceptionally long design made it quick. [4] The deck plan included comfortable living quarters for the captain, officers, and crew, which were heated by a donkey steam engine below. Bathrooms were equipped with running water, and telephone system made it possible to communicate easily throughout the ship. [5]  Despite Wyoming’s cutting-edge features and speed on the open water, it was not without challenges. The ship could be difficult to maneuver in confined spaces, and the engine fire generally needed to be extinguished during storms for safety. [6] John B. Brooks, Governor Brooks’ 18-year-old nephew, would later describe Wyoming’s maiden voyage from Bath to Norfolk, Virginia in which an insufficient supply of coal forced a small crew to manhandle the ship’s 12,000 square yards of canvas sails. [7,8] Even so, Wyoming was known to be easy to handle and profitable carrying coal from Virginia to New England over the next eight years. 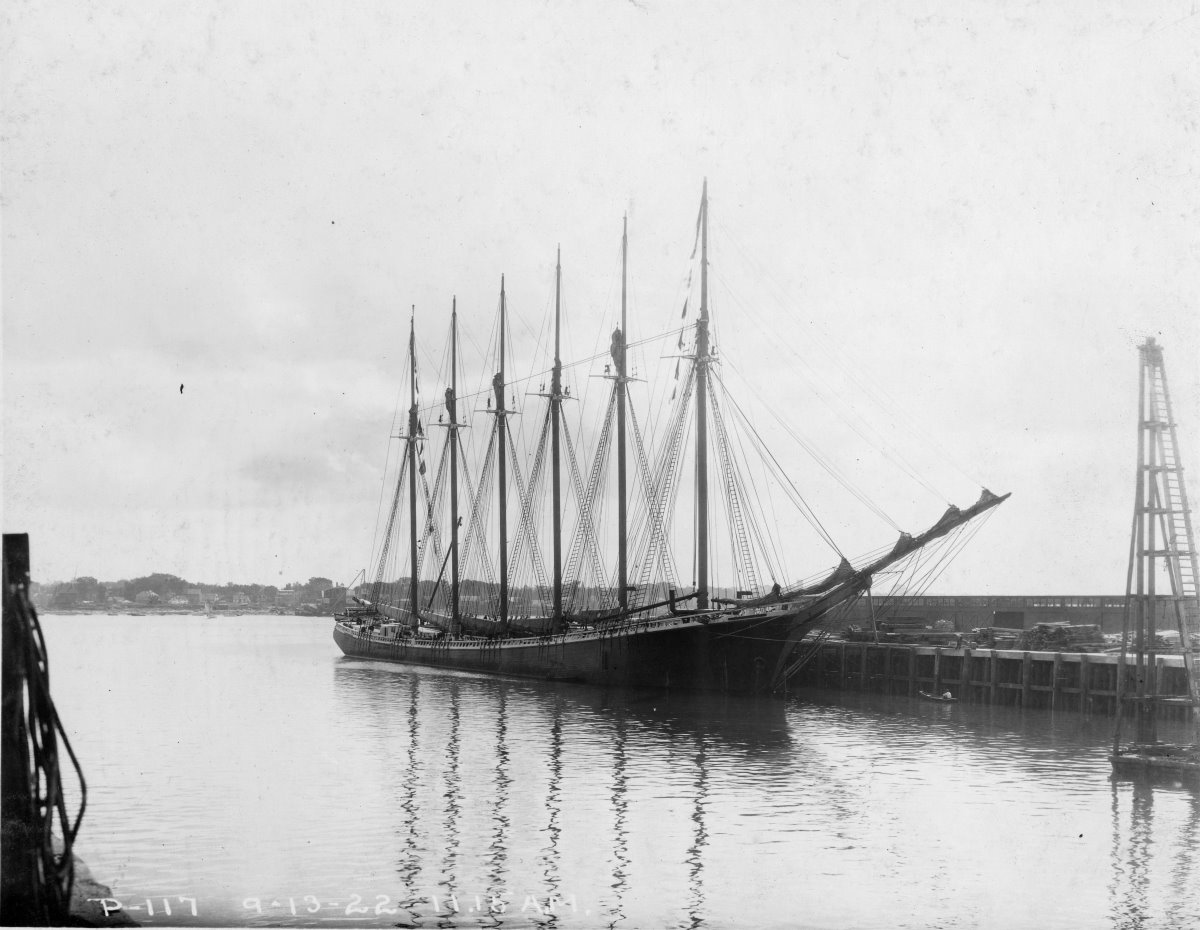 The Wyoming at State Pier Portland, ME on September 13, 1922
Image courtesy of Maine Maritime Museum.

Due to a shipping shortage, wooden schooners including Wyoming, Governor Brooks and other Percy & Small vessels, were bought out by the France and Canada Steamship Co. in 1917. [9] For the remainder of World War I, the Wyoming carried cargo from the U.S. to foreign ports, even managing to outrun a German U-Boat during one voyage. [10] In 1921, the schooner changed hands again and was sold to investors from Maine and recommenced shipping coal along the Atlantic coast. [11] On a routine voyage from Norfolk, Virginia to Portland, Maine in the spring of 1924, the Wyoming got caught in a gale. Snow and waves pounded the ship for nine days, and it never returned to port. Captain Gleasel and his twelve crewmembers were never seen again. [12] 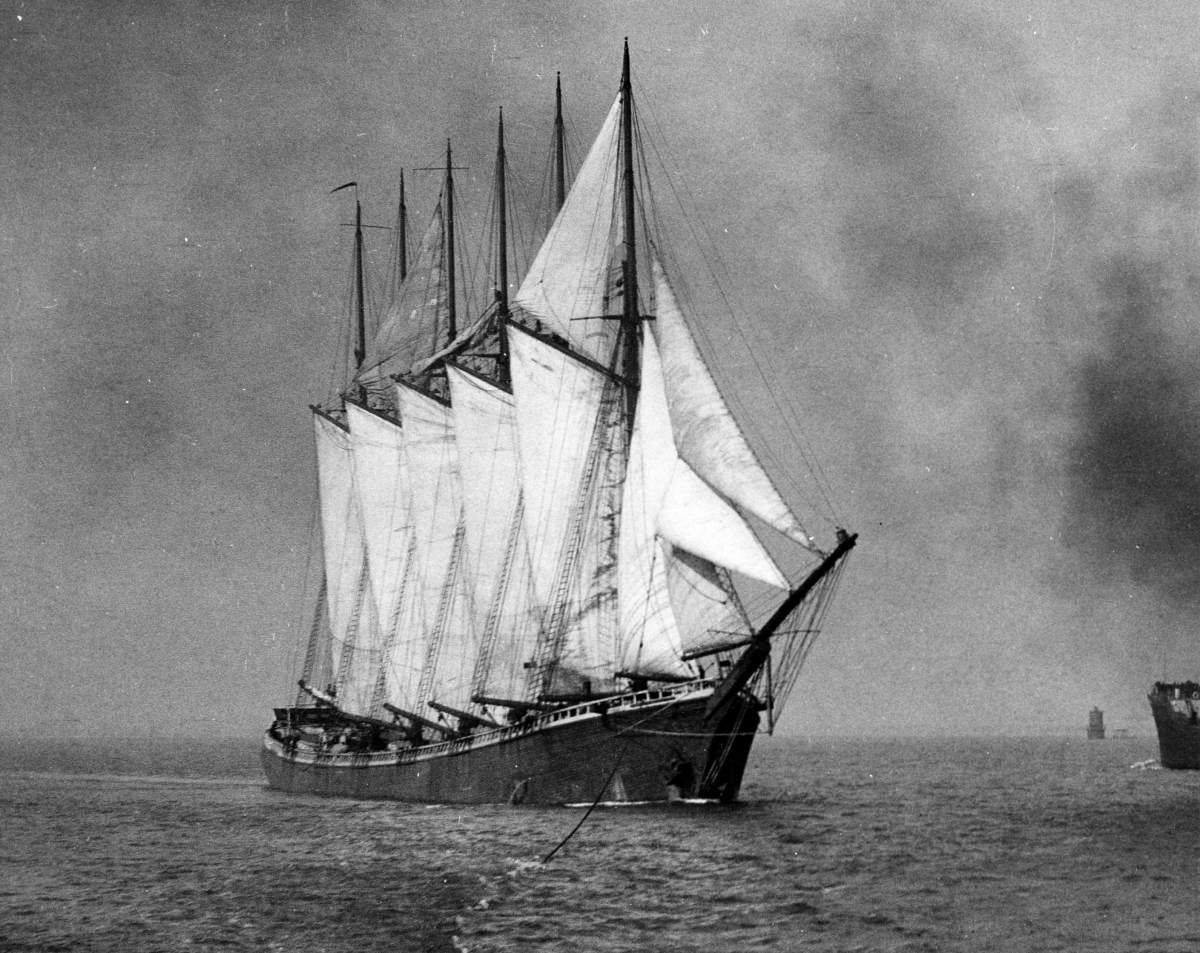 See the notes and bibliography tab for source information.

The Wreck of the Schooner "WYOMING", the Largest Wooden Ship in History 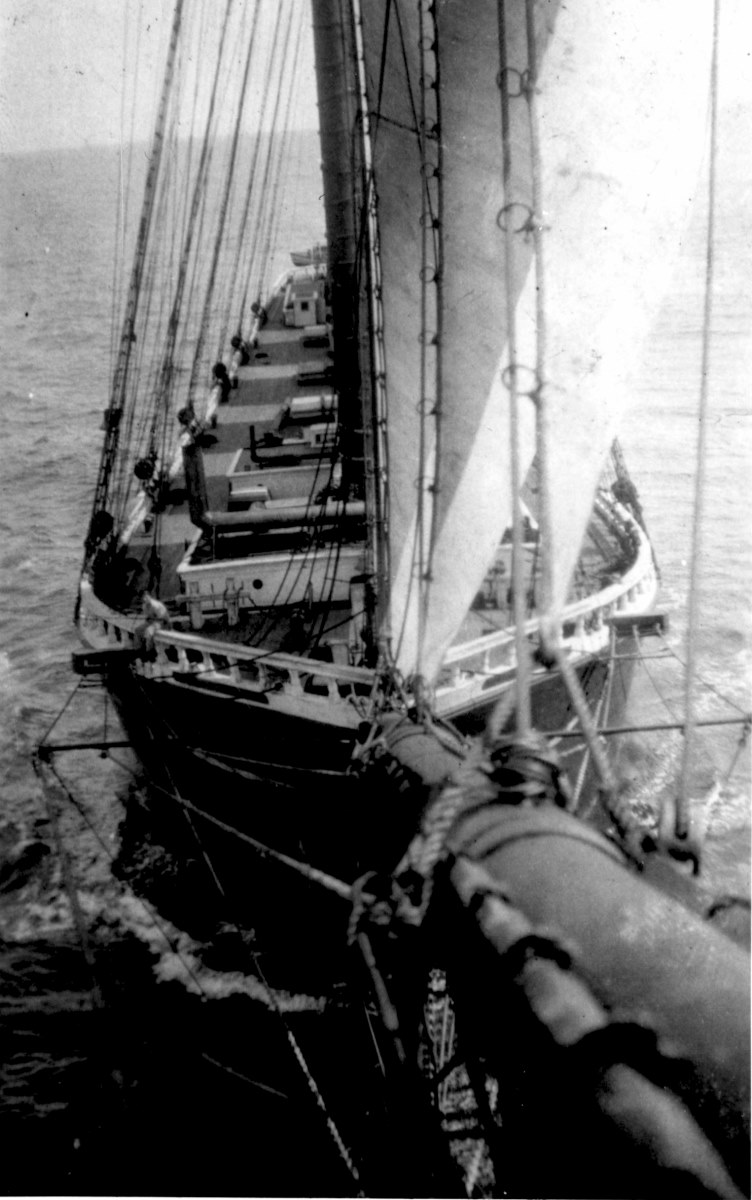 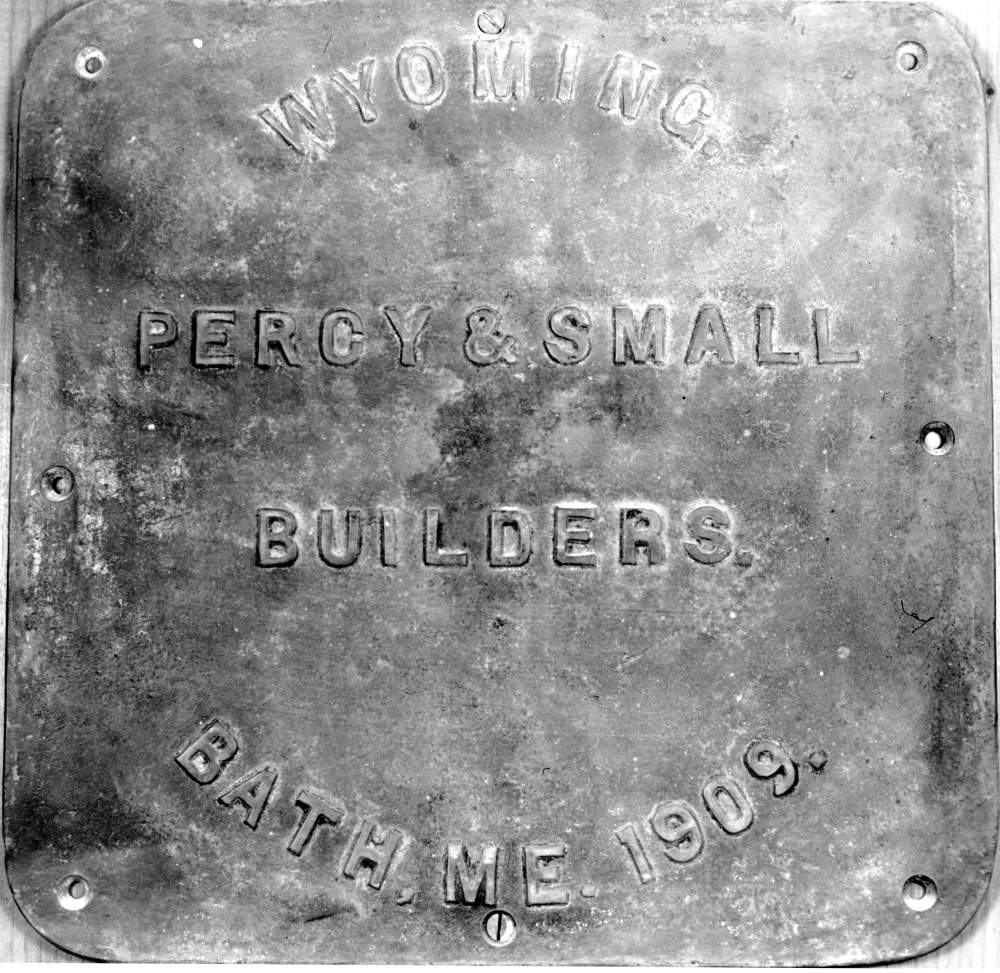 Cabin boy on the Wyoming deck 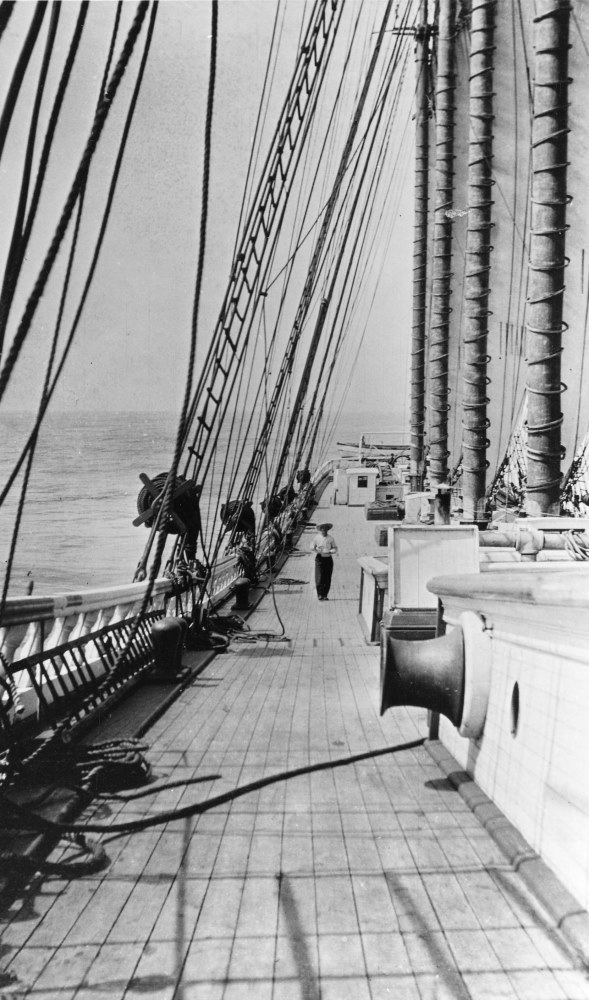 Photo taken by John B. Brooks
Courtesy of the Maine Maritime Museum.